Donum Libertatis: The Gift of Freedom

My Dear Brothers and Sisters in Christ:

One of the most magnificent gifts given to us by God is “The Gift of Freedom” — Donum Libertatis.  This is most wonderfully expressed in our human nature with the exercise of our free will.  In the United States, we are especially blessed in that we have the constitutional freedom as a people and a nation to exercise our right to vote.  This affords us the opportunity to use our free will for the good of our families, our church, and the greater community.

Through the gift of free will, God provides each of us with our own individual intellect, the ability to reason, and the freedom to make choices in our lives.  Sometimes our choices glorify God.  Sometimes they lead to sinfulness and are inconsistent with Christ’s teachings and His desire and will for each of us.  Sometimes we allow our decisions to be based on feelings rooted in emotion rather than the process of informing our conscience by praying and discerning the voice of God and then acting upon it.

As we approach Election Day, as Bishop, it is critically important for me to offer guidance to all the Faithful of our four-county diocese in regard to developing an informed conscience and how that informed conscience needs to reflect our faith, our election process, and ultimately the decisions we make concerning the elected officials who protect our freedoms.  The Catechism of the Catholic Church (1731) teaches us that “Freedom is the power, rooted in reason and will, to act or not to act, to do this or that, and to perform deliberate actions on one’s own responsibility.  By free will one shapes one’s own life.  Human freedom is a force for growth and maturity in truth and goodness; it attains its perfection when directed toward God, our beatitude.”

As responsible citizens and members of our faith community, we are called to exercise our freedom, but not without using our intellect and rational abilities.  It is our moral responsibility to investigate and understand the positions of candidates on all the critical issues facing us as individuals, a community, and as a nation.  As People of Faith, abortion, euthanasia, care for the poor, care for the elderly or infirmed, immigration, the death penalty, and economic and social justice concerns are especially important to us because this is the very intersection of where faith and morals meet society and action.  As Disciples of Christ living in the world, we have a civic and moral duty to advocate for a just and equitable society.  Each of these individual issues needs to be considered in the context of a moral vision in union with the Church’s teachings.  It would be irresponsible to cast a vote for a particular candidate if we do not know his or her position on the issues related to our faith, especially on issues related to the dignity of human life.

His Holiness, Pope Francis, addresses this in Amoris Laetitia #265: “Doing what is right means more than ‘judging what seems best’ or knowing clearly what needs to be done, as important as this is….We have to arrive at the point where the good that the intellect grasps can take root in us as a profound affective inclination, as a thirst for the good that outweighs other attractions and helps us to realize that what we consider objectively good is also good ‘for us’ here and now.”

Oftentimes, we allow emotions to guide these important decisions exclusively.  We listen to the pundits on television and the internet and allow the loudest voices to frame our conscience instead of listening to the voice that matters most — God’s.  Decisions made absent from prayer, enlightened discernment, and moral certitude can pull us away from actions that will lead to the common good of our country and of humanity at large.  Selfishly, we sometimes choose to make decisions that are only in our own personal interests or in line with our political leanings or preferences and fail to consider the needs of the poor and most vulnerable.

The Catechism of the Catholic Church tells us that forming our conscience means “formulating its judgments according to reason, in conformity with the true good willed by the wisdom of the Creator.”  When we inform our conscience, we come to a level of understanding that incorporates our experience, our emotions and our intellect. Informed conscience involves an interior dialogue that leads to a comprehensive approach to knowing God’s truth in determining the best course of action.

His Holiness, Saint John Paul II, wrote in his encyclical Veritatis Splendor #58, “Moral conscience does not close man within an insurmountable and impenetrable solitude, but opens him to the call, to the voice of God.  In this, and not in anything else, lies the entire mystery and the dignity of the moral conscience: in being the place, the sacred place where God speaks to man.”

It is often said that the Church should in no way discuss politics or anything political in nature, leaving it to people’s individual consciences to make decisions.  I frequently hear discussions about the separation of Church and State.  As a matter of fact, many good-intentioned people will often quote this to me, my brother priests, and others.  As a point of reference, the First Amendment of the Constitution prohibits the government from favoring one religion over another or advancing or inhibiting religious liberties.  It does not separate religion from politics and public life.  This is a grave misrepresentation often used to prevent firmly held religious convictions from entering the public arena or to motivate choices on election day.

The Vatican II document Gaudium et Spes #76 explains the importance of a proper understanding of separation of Church and State: It is very important, especially where a pluralistic society prevails, that there be a correct notion of the relationship between the political community and the Church, and a clear distinction between the tasks which Christians undertake, individually or as a group, on their own responsibility as citizens guided by the dictates of a Christian conscience, and the activities which, in union with their pastors, they carry out in the name of the Church.

The Church, by reason of her role and competence, is not identified in any way with the political community nor bound to any political system.  She is at once a sign and a safeguard of the transcendent character of the human person.

The Church and the political community in their own fields are autonomous and independent from each other. Yet both, under different titles, are devoted to the personal and social vocation of the same men (and women).  The more that both foster sounder cooperation between themselves with due consideration for the circumstances of time and place, the more effective will their service be exercised for the good of all.  For man’s horizons are not limited only to the temporal order; while living in the context of human history, he preserves intact his eternal vocation.  The Church, for her part, founded on the love of the Redeemer, contributes toward the reign of justice and charity within the borders of a nation and between nations.  By preaching the truths of the Gospel, and bringing to bear on all fields of human endeavor the light of her doctrine and of a Christian witness, she respects and fosters the political freedom and responsibility of citizens.

As Catholics, we have a right and a moral obligation to advocate for the things that we believe are important to us, particularly when it comes to our faith and morals.  Now more than ever we need to understand how policies affect issues near and dear to us as Catholics, such as health care, religious liberty, Christian anthropology, and freedom of religion and speech.  This is especially important when we investigate and educate ourselves on candidates’ positions on human life at every stage of its existence.

Far reaching consequences of positions and policies held by particular candidates who are elected and govern can impact the effectiveness of the Church’s mission and its ability to be of service to the faithful, our communities, and the entire country, now and into the future.  The election of certain candidates can also be a part of a gradual erosion of religious freedom, which is a danger that we should always be conscious of when reviewing candidates’ positions.

The Church will not endorse one political candidate over another.  It is certainly not my purview as Bishop to tell you who you should support with your vote. This is an opportunity for me, however, as your Shepherd, to teach and guide you in the mind of the Church and to help in guiding the correct development of an informed conscience.  It is also the obligation of my office to clearly articulate the Church’s teaching on these issues before you exercise such a precious and important right of citizenship by voting.

Those who follow the teachings of the Church on pro-life issues understand that life must be respected from conception until natural death.  As Catholics, we are called to advocate for the poor and the vulnerable, to be good stewards of our natural resources, and to care for all the vulnerable without prejudice or discrimination.  We are called to be a voice in the public arena.  We have been given the right to vote, and we need to use that right as the instrument to express our Catholic teachings, our firmly held religious convictions, while being able to freely exercise the Church’s right to fulfill our mission of charity, service, and education in our local communities, the state, and our nation.  We must especially advocate for the dignity for all human life.  This is the preeminent issue because without life, no other rights or freedoms can exist.

The United States Conference of Catholic Bishops (USCCB) — in their document Forming Consciences for Faithful Citizenship 56 — reflect on these issues and the duty of all bishops to apply these moral principles to key public policy decisions facing our nation, outlining directions on issues that have important moral and ethical dimensions. “Building a world of respect for human life and dignity, where justice and peace prevail, requires more than just political commitment. Individuals, families, businesses, community organizations, and governments all have a role to play. Participation in political life in light of fundamental moral principles is an essential duty for every Catholic and all people of good will.”

May the Holy Spirit, the Giver of Wisdom and Fortitude, strengthen and guide us as we continue to form our consciences in Christ to undertake the important responsibility and exercise our right to vote this Fall in the spirit of Donum Libertatis, the Gift of Freedom.  Amen.

Your brother in Christ,

The Most Reverend Larry J. Kulick, J.C.L.Bishop of Greensburg

Given at Blessed Sacrament Cathedral on October 18, 2022 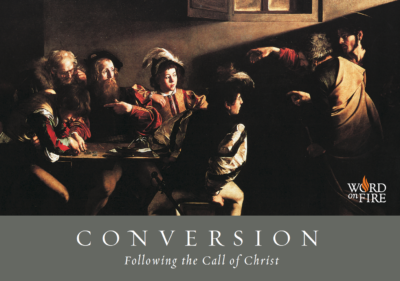 Immaculata Men’s and Women’s Group Fall/Winter 2022 Schedule This season will be viewing and discussing Conversion: Following the Call of Christ. In this film and study program, Bishop Robert Barron illuminates six biblical stories of conversion, demonstrating how six ordinary people, just like you, were met by Jesus where they[...]
9:00 am Breakfast with Santa @ Our Lady's Plaza
Breakfast with Santa @ Our Lady's Plaza
Dec 10 @ 9:00 am – 11:00 am 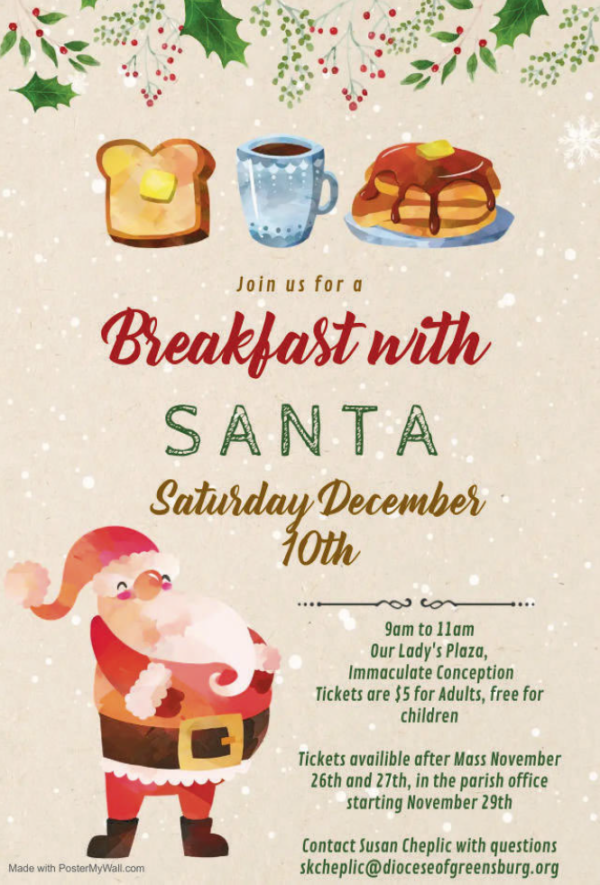 We are so excited to be bringing back our annual Breakfast with Santa! Santa is getting ready for a Merry Christmas. He’s checking his list for those who are naughty or nice, and what things to do before Jesus’ birthday. So, don’t forget to get your tickets for our annual[...]
Dec
11
Sun
6:30 am IMG/IWG: Conversion @ Our Lady's Plaza
IMG/IWG: Conversion @ Our Lady's Plaza
Dec 11 @ 6:30 am – 7:45 am

Immaculata Men’s and Women’s Group Fall/Winter 2022 Schedule This season will be viewing and discussing Conversion: Following the Call of Christ. In this film and study program, Bishop Robert Barron illuminates six biblical stories of conversion, demonstrating how six ordinary people, just like you, were met by Jesus where they[...]
View Calendar